The calendar is pushing into the final third of January – where typically Lake Winnebago’s ice fishing scene is going full tilt. In 2020, the region continues to struggle to produce enough safe ice to attract angles to the main lake.

Over the last several weeks above freezing temperatures were the norm, along with some low-pressure systems which produced strong winds and some snowfall. Lake Winnebago is about 90 percent ice-covered as of 1.18.20. Much of this ice is new ice and less than 4 inches. The ice is now snow-covered, after the 4-8” of snow, which fell on Saturday 1.18.2020. There was open water reported just outside of Quinney a few days ago, along with numerous “geese holes” along the southern and western shores. Geese holes are where the birds sit in open water, preventing the ice to form.

Along with parts of the east shore of Lake Winnebago, the first 50-yards from shore has decent ice; but depths drop off quickly after leaving the old sheet of ice to less than 4 inches. On the west shore, the back bays have healthy activity with protected areas reporting in between 6-15” of ice. Bluegill activity is reported as strong, especially after low-pressure systems. 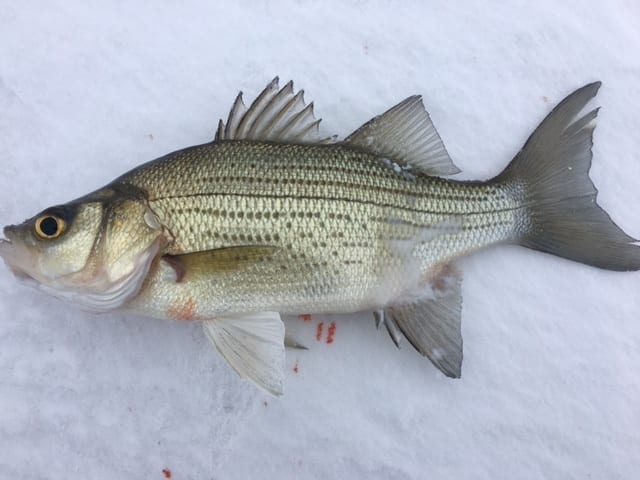 Lake Poygan remains the focal point for most anglers. Poygan still has variable ice conditions with 7-15” reported, with 8-10” being the average report. ATV traffic is standard, while cars are foolishly starting to venture out. This is not advised with the inconsistent ice sheet. Don’t be a news story! No ice is ever 100% safe.

Overall the bite on Poygan is solid for mid-sized walleyes, white bass, and crappies. I would not expect a limit on your trip, but a few fish can be expected.

There are a few days of subzero temperatures projected over the next week, followed by above freezing temperatures predicted for next weekend. Let’s hope the wind stays at a minimum to let some of this ice cure and build.

mark@myfishingpartner.com is my email. Please feel free to send me reports of your fishing outings!