East Central Wisconsin has seen near average temperatures over the past several weeks, with trace amounts of snow.  In general, the daytime air temperatures have been around the freezing mark, with nighttime lows in the ’20s.  The system continues to make ice most days on Lake Winnebago and Lake Poygan.

Lake Winnebago is about 90% frozen over with some open areas of water in the central basin.  Generally, ice depths on the main lake vary from 6” down to less than an inch, based on location.  Water clarity has been clouded, but clearer in most harbors and bays.  As precipitation and melting happen, water clarity can vary as runoff occurs.

The ice surface is very inconsistent.  In some areas, the surface is like glass.  While in other regions, massive ice chunks lie scattered on the surface making travel difficult, even for individuals walking on the ice.  Some of this variance is contributed to ice sheets forming at different times.  There is minimal snow on the ice surface now, so snow cleats/creepers are highly suggested to prevent falling.  If we get a significant snowfall in the future, these ice chunks will be become a danger to ATV’s and trucks, if buried under the snow.

Anglers have been out in force in some of the popular bays and harbors on Lake Winnebago, as everyone seems to have the itch to go fishing.  For some individuals, especially those who don’t own a boat, this is the time of the year they look forward to the most. 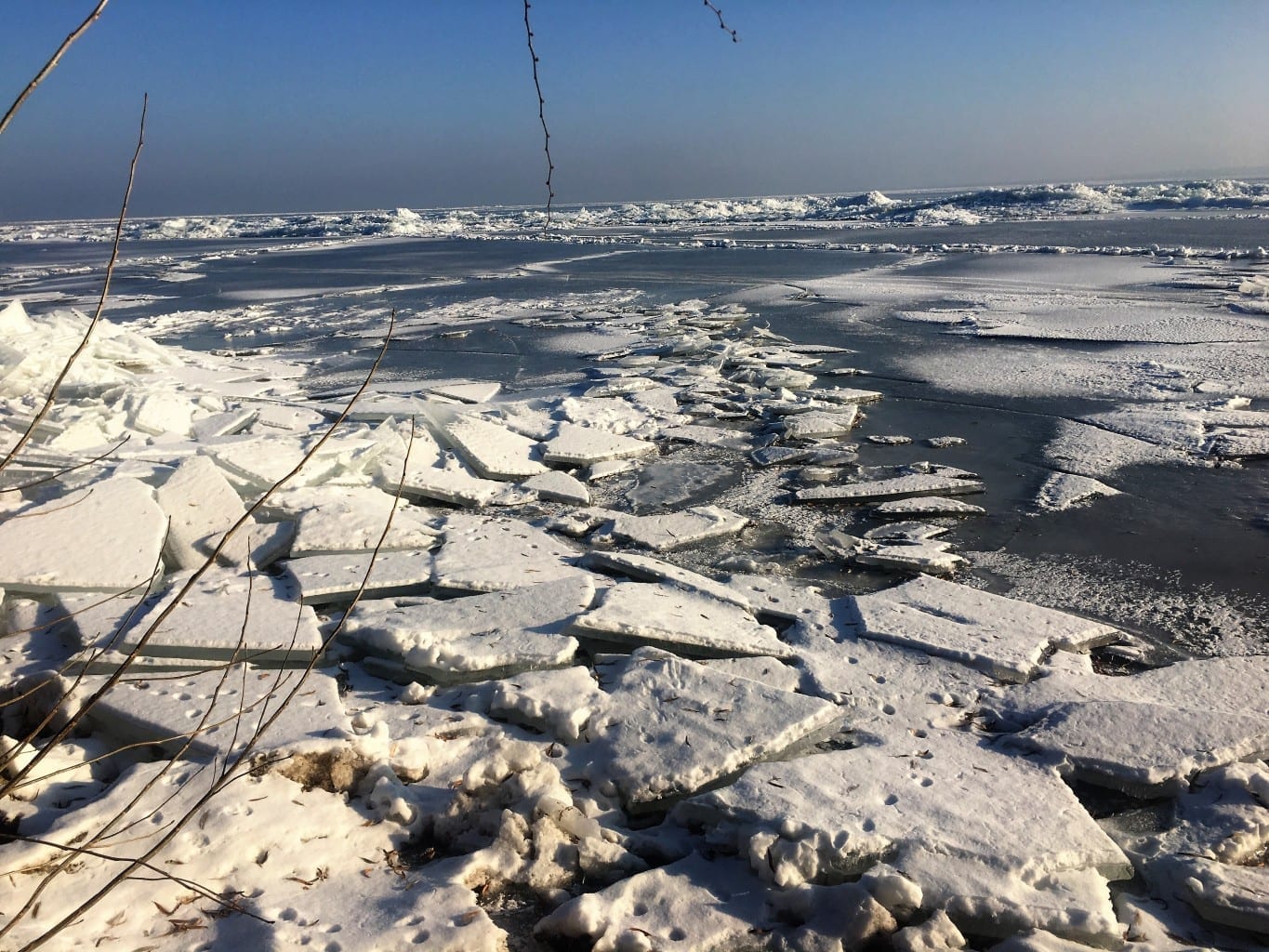 The Big Hole in Fond du Lac, WI (Lakeside Park Harbor) has solid ice pushing into the 6-inch range.  The harbor is a critical first ice location, being one of the first places to lock up each season.  This area was walloped early on by anxious fishermen and results have been weak from this location.  In the mix here are perch and crappies being taken on small minnows.

Similarly, the old Chaparral in North Fond du Lac had similar conditions and results.  The area on the main lake outside of the Chaparral has plenty of jagged ice, but the walkout has been worth it for some anglers seeking perch.  Be sure to check ice often for thickness anytime heading out beyond the bays.  Ice depths have been variable from 1-6 inches.  The ice is never 100% safe and is never consistent.

The area at Wendt’s had little activity this past week.  The ice is still setting up and varied between 2-5” in thickness.  There have been some anglers venturing out on foot; however, no credible reports were received pertaining the bite here.  There is a massive shove (estimated around 8-10 feet tall) near the island, which will likely be a challenge to motorized vehicles in the future.

The Jesuit area (Black Wolf, WI) has seen steady traffic with ice depths running in the 3-6” ranges.  Reports from this area showing a good mix of fish including walleyes, crappies, perch and white bass.  Walleyes have been in the average to small sizes.

Asylum Bay had up to 7” of ice reported and had the most anglers.  A small village had worked their way out toward the main lake and was packed tightly this weekend.  Overall, most anglers were producing fish, many which were undersized.  However, bigger crappies, bluegills, and perch have been taken.  Overhead noise and traffic will affect the bite, so look to non-peak hours to hit this area. Waxies on a gold tungsten jig was a solid combination in this area.  However, with the healthy population of fish, many tactics were producing positive results including the use of minnows.  Low light periods are producing best. 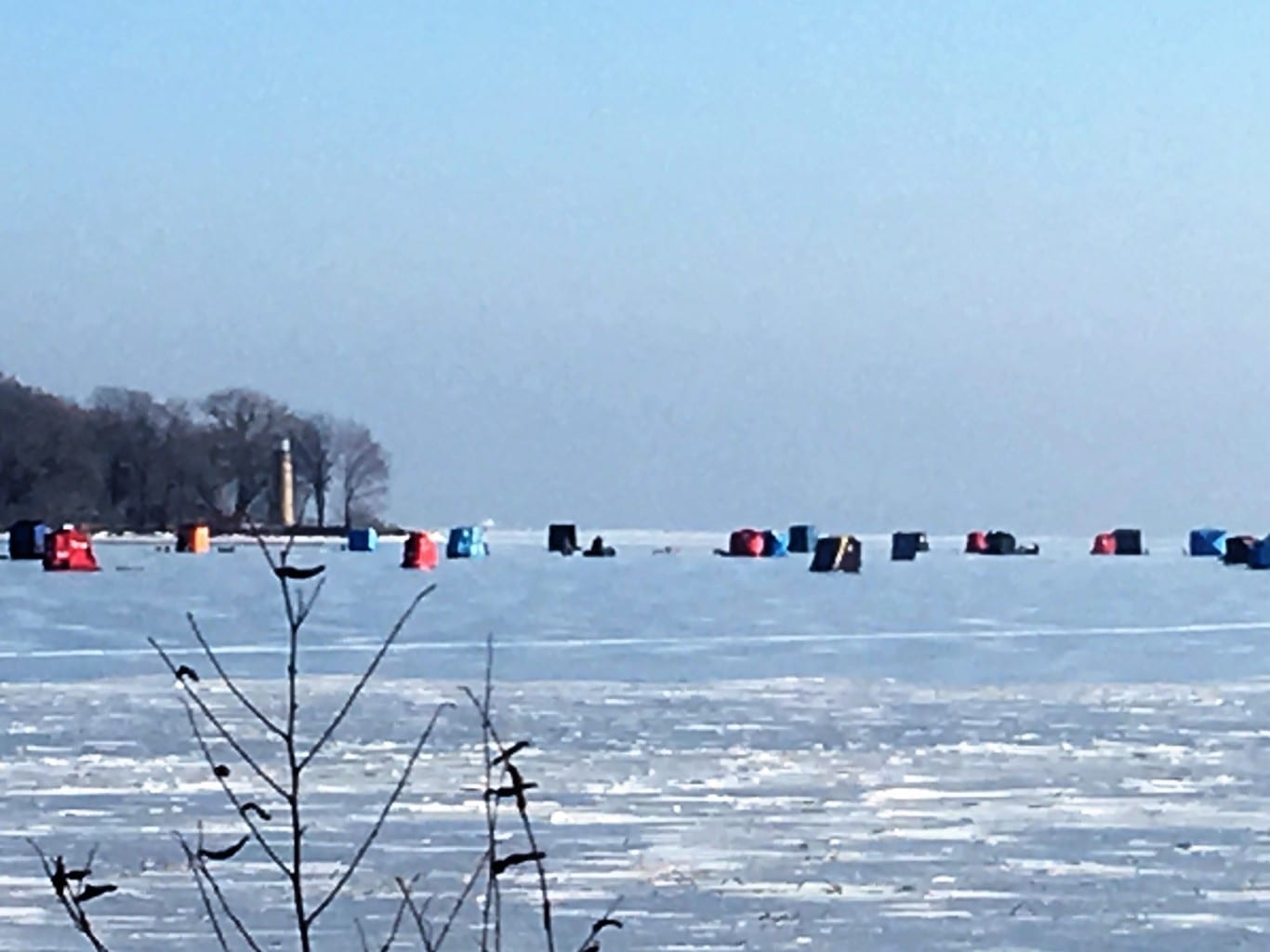 rThe east shore had no ice or fishing reports this week.

Lake Poygan has some revolting and inconsistent ice.  While access is easy, the lake has not frozen in all areas, and open water can be seen from shore and the satellite images.  While anglers are using this ice sheet, I would not recommend fishermen who are not comfortable with this body of water to venture out.  The ice has been shifting significantly with winds.  Ice depths can vary within a 10-foot circumference.   Fishing has been slow this week.  We need more cold weather to get this body of water firmed up.

Bottom line, most areas have sketchy ice currently, but there are opportunities to find stable ice in bays and along select shorelines.  Any wind event is not going to help the system as Lake Winnebago and Lake Poygan is not entirely frozen and shifting ice will become detrimental for ice development.  Be smart, have your safety gear and most important always go with someone else at this time of year.  The long-range forecast will not get the ice to the promised land anytime soon.  Expect to have suboptimal ice conditions thru the end of the year based on current weather forecasts.

Have a happy Holiday season and most importantly stay on top!