Is Your Walleye Rig in a Rut?

Is Your Walleye Rig in a Rut?

Is the same old nightcrawler or jig always on your walleye rod, even if you’re not catching fish? Maybe it’s time for a change.

Walleye fishing can be tough at times. But given that it’s tough, are you doing everything you can to solve your own problems or are you just throwing the same old rig in the same old places?

If you are using the same rigs in the same places, give something new a try. How about jerkbaits and crankbaits? What about a spoon? Sure, they are a little different – but they are used by some of the best in the business.

While you are reviewing your lure choices, why not try new waters as well? Try fishing a new river, the tailrace waters below a dam near your home, or perhaps a reservoir.

Man made reservoirs, while not true rivers, sometimes have many of their characteristics. They generate current along the old river channels when the dams are pulling water, either for power generation or flood control. At times they act and fish very much like rivers.

Serious consideration of jerkbaits and crankbaits begins by discussing them with top walleye experts such as Doug Dahl. He has fished these baits for a number of years with great success.

According to Dahl, early spring is prime for these baits. Water temperatures are typically below 50 degrees and the fish are beginning to think about the spawn. Given these conditions, Dahl’s preference is to throw large, hard-bodied jerkbaits. His selection includes 5-, 6- or even 7-inch baits.

He selects large baits at this time of year mostly because the forage is large. Any new young-of-the-year forage fish that may be in the water are still very small, and of course early in the year may not have hatched yet. The only thing for a predator to eat is left over from last year. That means adult-sized bait.

Dahl firmly believes in using a bait that has a tight wobble in early spring. He believes that, given the cool water, a tight wobble more naturally resembles the movement of real forage.

When it comes to color selection, he holds equally firm convictions. If the water is clear to slightly stained, he will select jerkbaits with a silver body and either a blue or black back. If the water has some color to it, however, he will go with something that offers more visibility – “clown” is one of his favorites.

Regardless of where he is fishing, Dahl looks for the same type of structure. He searches for a channel bend or break that is near a spawning flat. If the bend or break is near a bluff or rock wall, so much the better.

Spawning flats are easy to identify, according to Dahl: look for large, expansive areas of rock, gravel and sand. Typical bottom composition is pea gravel and sand with baseball-sized chunk rock under running water. Such areas may be found near a dam, feeder creek or exposed rocky point.

In many cases, the best spawning areas will be in the northeast corner of the water. This location provides exposure to the warm late afternoon sun, as well as the prevailing winds.

Typical spawning depths range from 2 to 10 feet, although Dahl has found walleyes spawning as shallow as 1 foot and as deep as 20 feet.

Water depth is less important to him than structure. He may fish water as shallow as 8 feet or, upon occasion, as deep as 25 feet. He holds the view that during the spring structure draws the fish, not depth.

“They are interested in reproducing,” he said. That means they are traveling along pre-spawn routes towards spawning flats. Water depth is a secondary consideration to them.

Dahl uses a simple, but precise, technique when fishing jerkbaits. As soon as the lure hits the water, he cranks it down as fast and as hard as possible. This will pull it to its maximum running depth quickly.

Once the lure is running at the right depth, he just twitches it along, one foot at a time, with long pauses in between the twitches.

“I allow the bait to sit motionless for 30 to 45 seconds at a minimum. This gives the fish a chance to look over the bait and rise up to take it,” said Dahl. 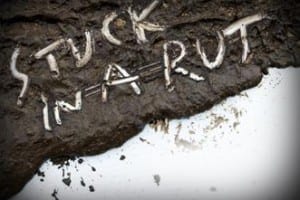 Dahl suggests that when working larger impounded reservoirs an angler visualize the channel as a river. Call the dam office to get the generation schedule and work the channel structure as if it were a traditional river. “It’s really not much different,” said the walleye expert.

When it comes to traditional crankbaits, Dahl’s advice is a bit different, although he still fishes the same areas. He prefers smaller, buoyant shad-imitating lures that run deep with a tight wobble. Wood-bodied baits are his choice. “Crankbaits will catch bigger fish in warmer water or when the fish are more active,” noted Dahl.

If the bite is tough or if there is a lot of water to cover, he will troll for his ‘eyes. He trolls with a three-way swivel rig. To one ring of the swivel he attaches the lure with a leader. To another he attaches a sinker on a drop line. The third runs back to the reel.

He then trolls this rig, using his electric trolling motor. This gives him the precise control and slower speed, no more than 1/2 mile per hour, which is necessary for success in the cool waters of early spring.

Dahl believes that trolling wood-bodied crankbaits is one of the most effective ways to find and catch walleyes. He trolls no matter the season and no matter the weather. He reports good catches of walleyes in the heat of summer and the cold of winter. As he and some of his friends are fond of saying, “If we could figure out how to troll under the ice, we would!”

Regardless of what rig or technique he is using, Dahl likes the new super lines for his walleye angling. He points out that their narrow diameter allows the lure to run as deep as possible while maintaining excellent strength and low stretch.

He does not use wire leaders. According to Dahl, wire leaders cause the lure to run with the nose slightly down. This is something he does not want. He makes an exception, however, when fishing waters where muskie bites may occur. Under those conditions, a wire leader is necessary.

Tailrace waters are another excellent choice for early season walleyes. The swift current typically found in these areas presents a host of problems for jerkbaits and crankbaits, however. If the truth be told, these baits are difficult, if not impossible, to work properly in swift current. They simply cannot be made to produce the correct wobble or suspend properly under such conditions.

Rogersis quick to point out that spoon selection is critical. Frustration with commercial spoons led him to begin pouring his own. He prefers lead for his body material. This gives him a modest size for his spoons in the 3/4- to 1-ounce sizes.

His design is basic. The spoon is teardrop shaped with a nose that is heavier than the tail. They are 3 to 4 inches in length, depending upon the weight.Rogersrigs them with high quality No. 4 round-bend treble hooks.

He uses vinyl paint for his finish. He first covers the spoon with a coat of white, then with the finish color, and finally with a clear coat for shine and protection.

When fishing tailrace waters, he selects eddies or small whirlpools as his target. These are caused by rock, wood or other obstructions under the water.

Rogerspoints out that baitfish are washed into these areas by the current. The baitfish, in turn, draw the walleyes.Rogerssuggests that anglers target the slack-water centers of these eddies for their lure presentations.

He casts or drops his spoon into the center of the slack-water area of his target. After allowing it to drop to the bottom, he lifts it up a foot or foot and a half with a swift, hard jerk.Rogers then allows his spoon to flutter down on a semi-slack line. He theorizes that the dropping, fluttering action resembles a baitfish in trouble. If the line twitches or if the spoon stops too soon, set the hook.

“The technique is really a no-brainer,” said Rogers.

His equipment selection comprises medium-heavy baitcasting equipment with a quality, abrasion-resistant 17-pound-test monofilament line. This gives him the required combination of feel and power necessary to handle big walleyes under difficult conditions.

Try something a bit different for your walleyes this spring. You just might be surprised at your success.