The much-awaited start of the open water walleye season became a reality this weekend as the Fox River in DePere, Wi became a favorite landing spot for anglers looking for their long-rod fix. The river opened around Monday 3.18.19, and boats immediately were on the water. 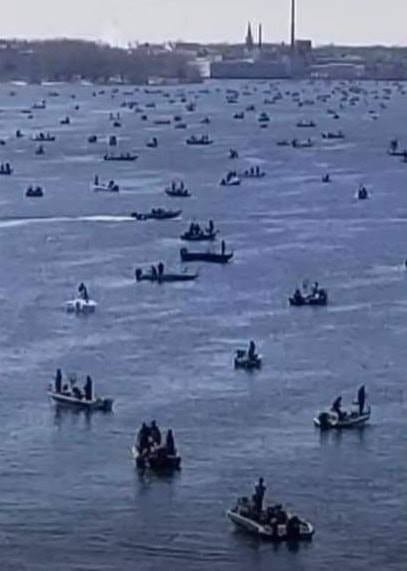 The Fox River, known for bringing the largest walleyes of the Bay of Green Bay into spawn, has multiple dam gates open as of Saturday. The current is strong, especially at the dam. Given the amount of water runoff from melting snow and rain in recent days, the water clarity is good for this time of year at about two feet of visibility.

By comparison, this area was open in late February last year. As a result, the water temperatures remain cool for this time of the year with 38-39 degrees registered on 3.24.19. Last year many of the walleyes were showing softening in their bellies on this date, indicating a readiness to spawn. All fish released this week were rock hard, suggesting the spawn is still better than a week away or more. Typically spawn date on this body of water is April 10th.

Hundreds of boats were on the water this weekend in the two-mile stretch from the dam to the Hwy 172 bridge. There were large numbers of male walleyes in the central river channel, most running between 12-19”. Traditional methods of a jig and a minnow were the predominant method to catch these fish. The males seemed to be congregated along the east side of the channel, where a lesser water current exists. The walleyes generally move thru lesser current on their voyage up the river and utilize the more massive current on the way home. 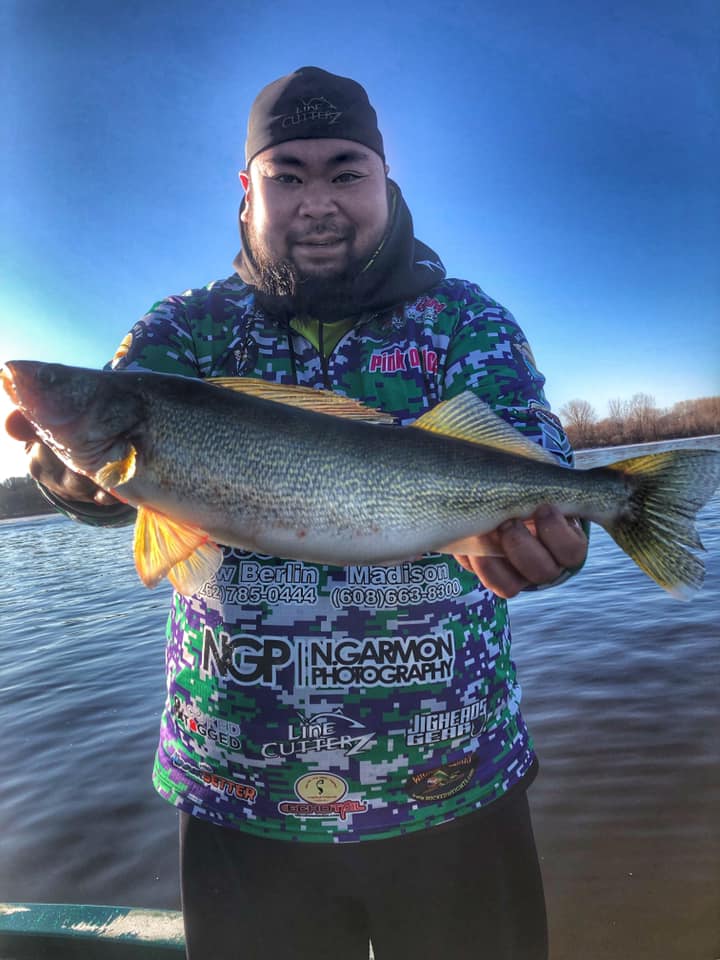 Additionally, some of the clam beds were holding walleyes. From an anchored position, anglers would pitch to the beds, and pump the jigs to attract hungry fish. Ripping raps or blade baits could also be used, with a lesser result. While I tried plastics in a limited fashion, I produced no fish. It just might be too aggressive with the cold water temps. I’d give the system a couple more days to warm before really hammering the plastics hard.

Just a reminder that the WI-DNR regulations limit anglers to a basket of one fish over 28” this time of year on the Fox River in Green Bay.

Color selection was not critical. The fish were hungry and were feeding. Personally, I did best on white or yellow. My boat partner did well on orange or blue. While stinger hooks are always a valuable tool this time of year, none of the walleyes were hooked by the stinger only, and the baits were entirely consumed.

Generally, fatheads are the bait of choice by anglers, but we did better with shiners this week. However, the shiners available from bait shops are running small in 2019.

The night bite has been solid in this stretch of water using trolling tactics in the shallows. There have been a few females taken of quality, but in general, the average female was running in the 22-26” range.

In the general area, we also found some carp, whitefish, and catfish active. We did hook into a musky also, but the mono was sawed off. 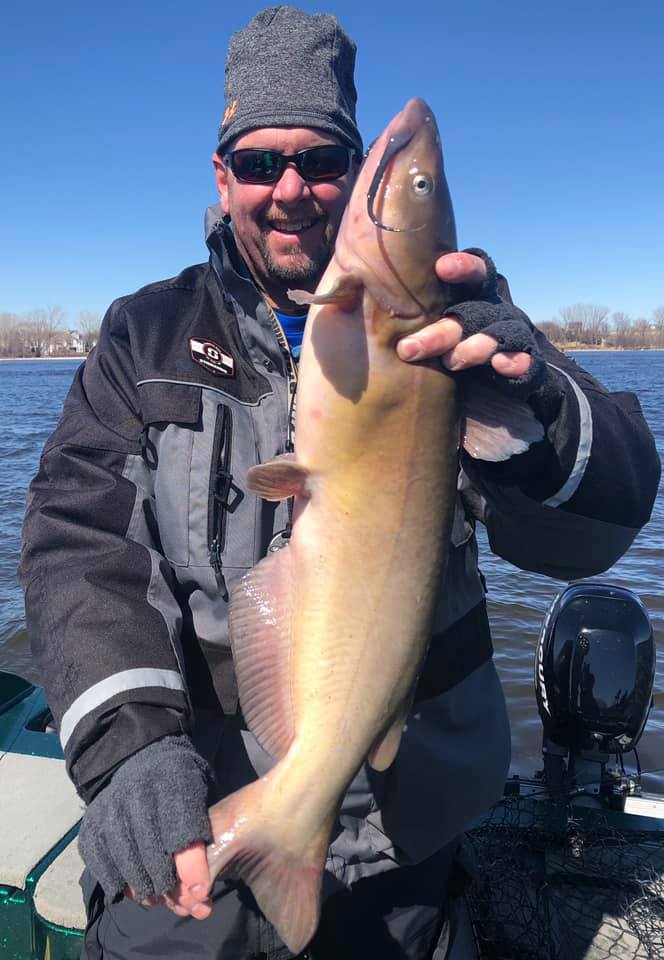 Mark Schram with a catfish from DePere Wi

We ventured further down the river (beyond the 172 bridge). There is considerably more floating ice and debris down the river. The water temperatures remained unchanged from the dam area. We noticed several pods of suspended fish along the way, assumed to be staging whitefish. However, very few “walleye marks” were observed.

Lake Winnebago is completely frozen yet but is not able to be fished safely at this point. The ice is breaking down. The Fox River in Oshkosh is open, with considerable ice flows coming down from Lake Buttes des Mortes. No reports from anglers as to the quality of the bite.

The next week will have plenty of activity in the Fox River in DePere, WI. Saturday features two tournaments (about 125 boats) out of Fox Point (Dairy Queen Launch), and the launch lot will be full before 6 AM. Recreational anglers will also be out in large numbers until the Wolf River becomes launch ready. The larger females need some more warm water to be called into the river system at this point. Rain is predicted late in the week, which could alter the dynamics of the river by next weekend.

Please bring your patience and a sense of humor should you venture out on any area waterway.